Back to Longevity Economy Notes 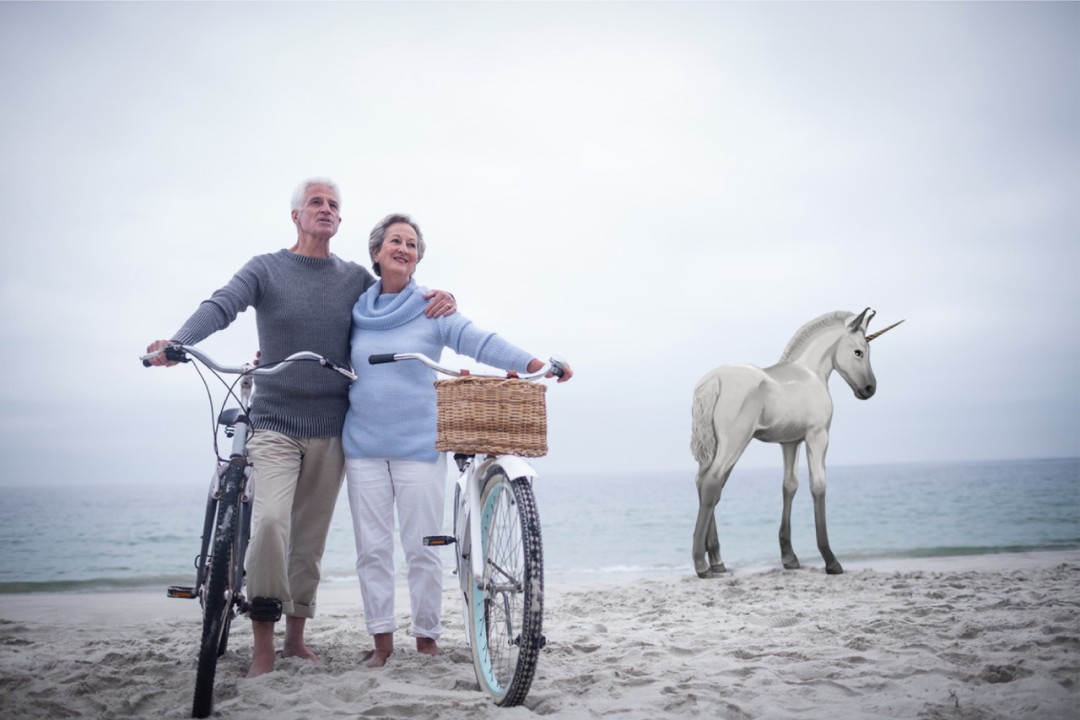 Unicorns fill the pages of children’s stories and literature. These mythical creatures are described as having magical powers. Of course, they are only images of literary lore and have never been seen.

There is another mythological creature, not in children's literature, but in the hopes and dreams of real estate investors and developers - the active adult.

The active adult fascinates the real estate and senior housing sector of the longevity economy. Active adults apparently share magical powers with the unicorn. Analysts see magic in their numbers, spending power, and assume that their desire to move into ‘active adult’ communities will bring immeasurable vitality to an entire real estate class. This elusive creature is in their mid 50s and beyond. They are thought to be today's youngest Baby Boomers and oldest Gen X'ers.

Despite their compelling numbers, are younger Baby Boomers and older Gen X'ers a story of more consumers in search of active adult living as we know it today, or a myth comparable to chasing unicorns?

There is a general consensus on what a unicorn looks like, less so for what is an active adult.

My colleagues and students at the MIT AgeLab recently conducted virtual focus groups discussing the meaning and future of home. Among the topics we asked older adults from across the country was what do they think when they hear the phrase active adult.

Much of the discussion can be captured by the response of one spirited woman.

She has a point. It would appear that this highly sought after creature of the longevity economy needs some definition if the magic is to be realized. 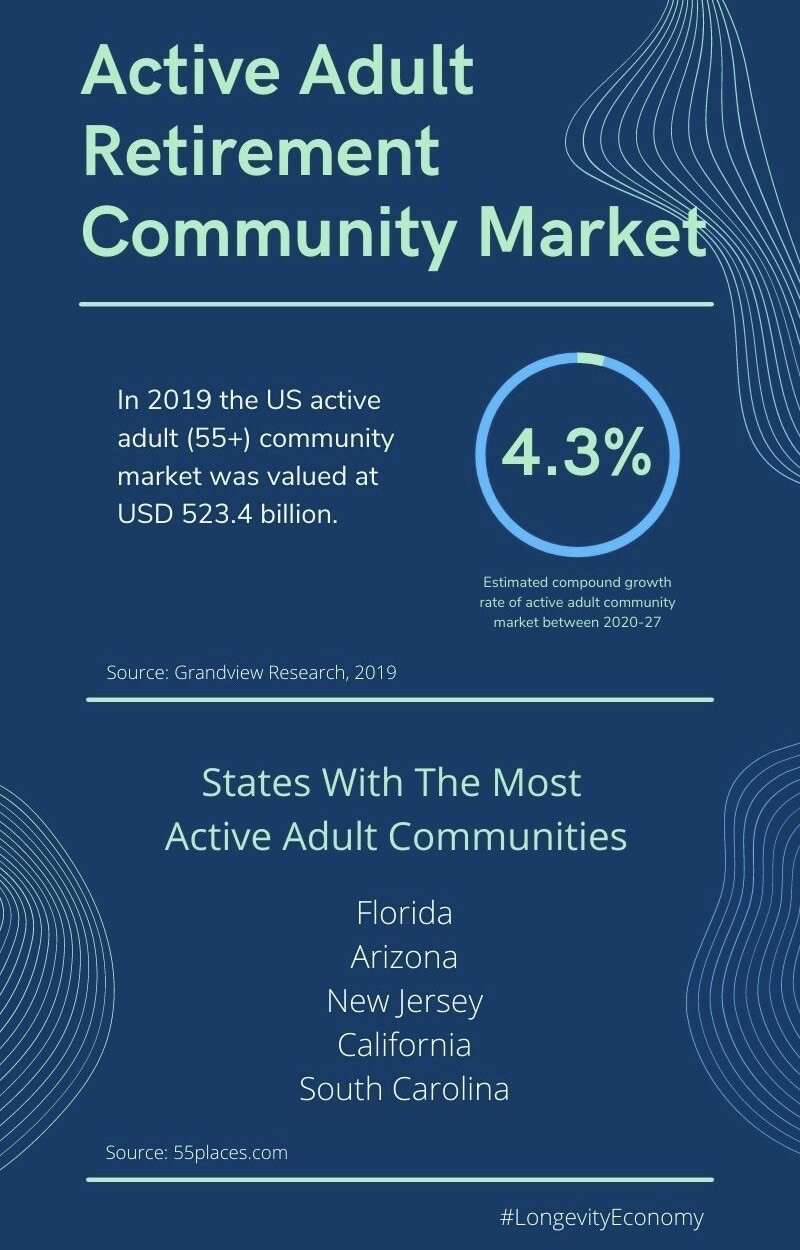 Unlike the mythological unicorn which can be described in great detail, few companies or analysts can define an active adult.

By all accounts it is about age, but what age? As with many parts of the longevity economy, 'age' is often defined by the legacy of archaic tradition or law rather than by any insight into contemporary consumer attitudes or behaviors. The 1995 Housing for Older Persons Act (HOPA) allows developers to restrict housing if they operate as “55 or over” community. Even though 55 years old has no basis in any widely accepted life stage or event. Think about it, how many blowout '55 year old' birthday parties do you attend?

A quick search of the term active adult shows that it is applied to people as young as 50 years old and as old as 75. Why not 50, 60, or 70? This is more than a pedantic discussion. At least one Massachusetts developer is struggling with this very problem.

A multifamily complex developed in the Boston suburbs broke ground and immediately posted signs to attract new residents. The first sign announced they were open to 50+ Active Adult Living.

Wait, not done yet. The signage now announces – Luxury 64+ Active Adult Living. Perhaps a delayed homage to the Beatles “When I am 64.”

Defining the age of an active adult is difficult enough, however, the greatest challenge for investors, developers, and operators may be understanding who are the younger Baby Boomers and older Gen X'ers they seek.

While the younger members of the Silent Generation, and the oldest Baby Boomers, are still rocking the images of active adult community websites these days, younger Baby Boomers, and the oldest of Gen X, are different. Age alone does not predict attitudes, preferences, and ultimately retirement lifestyle choices.

The differences of experience and attitudes within the Boomer generation alone are striking. Older Boomers were teens when President Kennedy was assassinated while younger Boomers and Gen X'ers were either toddlers or not yet born. Some older Boomers served in Vietnam while younger Boomers saw it only on television and Gen X'ers studied the war as part of history class in school. Even differences in popular culture form a generation within generation. For example, younger Boomers and Gen X discovered Paul McCartney when he was a Wing, not a Beatle. Differences in formative life experiences are only one dimension that is likely to shape the future active adult consumer -- education, work, and the very meaning of community may be even more important in what they will want and buy in older age.

According to Pew Research, Gen X'ers and younger Boomers have more college education than previous generations. They even have more years of college education than the Boomers who are old enough to say they actually remember Woodstock. For example, 12% of Gen X, whose leading edge is now past 55 years old, have more college education than the Silent Generation. Education alone certainly does not make you any smarter, but it is very likely to provide a broader range of interests. The powerful vision of retirement being an extended vacation -- a time of earned leisure after decades of work -- may not be enough to satisfy a new generation of active adults. In short, communities built around pools, beaches, and golf alone are not likely to close the proverbial deal.

For example, the signature attraction of many active adult communities is golf -- an amenity predicated on a post-WWII vision of life after work as a time to play. Similar to my own golf skills, the number of people who play golf is in decline. Reports indicate that between 2003 and 2018 there were 6.8 million fewer golfers -- a decrease of 22%. Active adult communities may not want to look at competing developers for inspiration, but instead look at the growing number of people who are choosing to relocate to college towns, even those with harsh winters, that offer play and a very wide range of activities and people of all ages that make life interesting everyday.

Play and leisure are certainly part of retirement, but clearly the 'active' in active adult is more than a powerful golf swing or beach walk. Work is the new retirement for many. Active adults in their 50s and 60s, particularly those who are more affluent, and spent their careers in the knowledge economy, are very likely to continue working - at least part-time.

Younger Boomer and Gen X women, in particular, have indicated that retirement for their partner may not mean classic retirement for them. Instead, active adult living may be a time for her to pursue her professional dreams with new found flexibility and unfettered freedom. Future community developments must be able to reflect and reinforce a blended active retirement that enables continued learning, work, and yes, play.

The precedent for many of today's active adult communities is a feeling of belonging, a kind of membership. The WWII and Silent generations were 'joiners.' They formed the backbone of classic membership organizations, such as Rotary and Lions, professional associations and unions, churches, synagogues, and mosques. Unlike previous generations, large swatches of younger Boomers and Gen X'ers have opted out of classic social affiliations. Rotary membership, for example, has declined from 386,000 in 2004 to 316,000. Gallup recently reported that membership in faith-based organizations has dipped below 50% for the first time in American history.

Harvard sociologist Robert Putnam has noted that 'belonging' to a group has waned with each successive generation. Putnam's classic book, Bowling Alone, weaves a narrative of how social capital or belonging has declined. The book's title provides an insightful illustration. Americans still like to bowl, but no longer join bowling leagues, they choose to bowl alone. Active adult community developers may find that the value of 'community,' especially if built on age and leisure alone, is not as compelling for today's and tomorrow's consumers as it was for previous generations.

Active adult community investors and developers are in danger of being blinded by the numbers of Americans nearing or clicking over their sixth decade of living. Numbers displayed in a spreadsheet, no matter how compelling, rarely provide critical insights behind a demographic trend line. While grouping people into buckets, such as 'Baby Boomer,' may be convenient mental shorthand, it can be devastatingly misleading. More people 50+ does not mean more of the same, nor does it mean yesterday's product assumptions will meet the needs of tomorrow's consumer. Assuming so may lead many investors to chase unicorns.